Identity at different levels in Europe and the United States

A pre-requisite for the establishment of a European superstate is a sense of Pan-European identity among the people of Europe. That is to say, Europeans will be unlikely to accept substantial transfers of sovereignty from their national parliaments to Brussels until enough of them identify more with Europe than with their own country. As I have noted before, this sense of Pan-European identity is not particularly widespread in Europe at the present time.

An interesting comparison is between the European Union on the one hand and the United States on the other (especially given Churchill's famous declaration in 1946 that "we must build a kind of United States of Europe"). The EU and the US are similar to one another in that each constitutes a federation of partially sovereign states. The key differences between them are: political structure (e.g., the US president is directly elected, whereas the president of the European Commission is appointed), and the amount of power wielded by central government (e.g., the US federal government accounts for ~60% of spending in the US, whereas the EU accounts for ~3% of spending in Europe).

In order to compare the relative importance of identity at different levels within Europe and the United States, I analysed data from the Eurobarometer survey and the US General Social Survey (GSS). Various waves of the Eurobarometer ask respondents to say how attached they feel to a) their country and b) Europe, on a scale from "very attached" to "not at all attached". Similarly, several waves of the GSS ask respondents to say how close they feel to a) their state and b) the USA, on a scale from "very close" to "not close at all".

I utilised the 2006 wave of the Eurobarometer (unweighted n > 13,000 after excluding Turkey), and averaged across the 1994, 2004 and 2014 waves of the GSS (unweighted n > 3000). The 2006 wave of the Eurobarometer was used for the sake of comparison with corresponding waves of the GSS (mean wave = 2004), and because it was the latest wave in which the relevant question was available prior to the Eurozone debt crisis. In both datasets, I created a variable measuring the extent to which a respondent identifies more with the higher-level unit (Europe/USA) than with the lower-level unit (country/state). This was done by simply subtracting a respondent's answer to the question about the lower level unit (e.g., 1, "not close at all") from her answer to the question about the higher level unit (e.g., 4, "very close"). Results are given in the chart below: 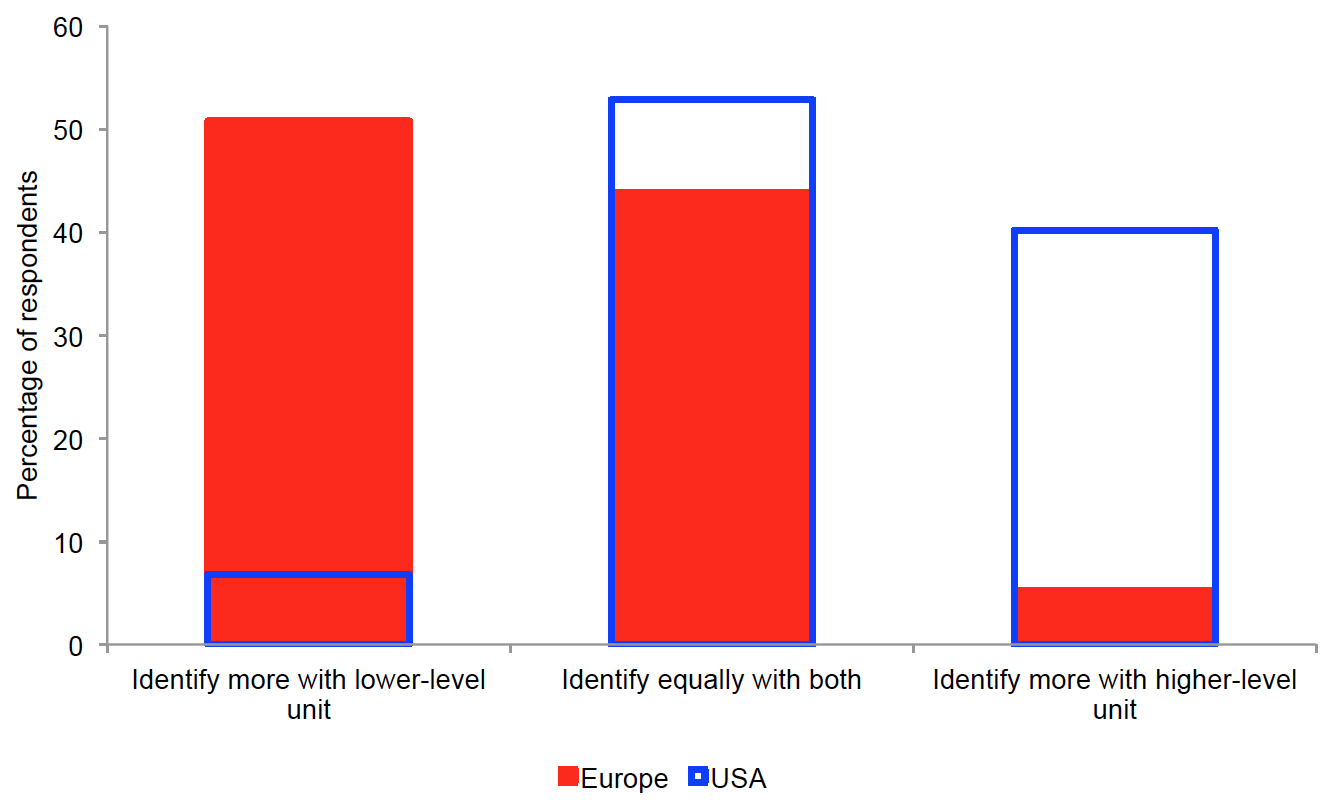 Note that the relatively high proportion of respondents identifying equally with both is likely due to the limited number of response categories available. By way of example, if there had been only two response categories available (e.g., 1, "identify"; and 0, "do not identify"), since most respondents identify at least a little bit with both levels, almost everyone would be assigned a zero on the variable measuring the extent to which he identifies more with the higher-level unit. Thus, the foregoing results almost certainly constitute a conservative assessment of the difference between Europeans and Americans.
Posted by Noah Carl at 15:47